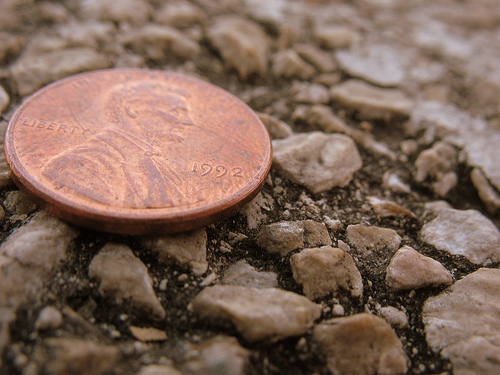 Money may not grow on trees, but it does abound on the ground!

How many times have you found a penny or two on the ground? Did you pick it up or just walk on by? When I see a penny on the ground it always brings to my mind the little saying, “If you see a penny pick it up and all day long you’ll have good luck.” So, inevitably I will pick a penny up and consider it a sign of good luck from the universe. This was my original belief about it, but then all of that shifted for me in 1998 and my experience of “pennies from heaven” widened.

It was in January of that year, while I was attending a spiritual-type of conference that I decided to take part in one of the speaker’s hour-long seminars about prosperity. I walked into the room and noticed a penny lying on the floor. Of course, I picked it up. Then I noticed another one and a few others. Now, I was beginning to feel a little silly about picking them all up, so I walked past a few of them after I had grabbed several others and took my seat in the audience. I was feeling a bit like my new found pennies were already bringing me luck since after all, I was sitting in a seminar that was going to be about prosperity. Yes, it was just a few pennies, but I was a couple of pennies wealthier. I heard within my thoughts, Benjamin Franklin saying, “A penny saved is a penny earned.”

The speaker said hello to the audience and then started her program by asking us if we noticed anything on the floor as we walked into the room. At that point, everyone in the room started looking around on the floor, while someone blurted out, “pennies!” She then asked us if anyone picked up any of them as they walked into the room. Only a few of us raised our hands, as we sheepishly acknowledged helping ourselves to the money. The speaker then asked us, “What would you do now if I told you that the pennies on the floor represent your ability to allow prosperity to flow into your lives?” Just like clockwork, people were quickly grasping at pennies to unashamedly clutch their slice of prosperity. The permission was granted.

I don’t remember really much more about her teachings on prosperity other than to accept the pennies on the ground as “seed money” and to share these seeds with others. She explained that they are the literal seeds to grow your prosperity and every time you find one on the ground, to pick it up, thank the universe and add it to the other change you have in your possession. Allow the commingling of change. Tell yourself that this penny is your proof that your prosperity is growing. It may seem like only one cent at a time, but nevertheless it is one cent wealthier. She shared that it is through the gratitude of receiving this one cent that allows for the flow of multiplication in myriad ways that abundance can show up. So, the penny is literally representative of wealth, yet also a symbol of prosperity flowing, all the while you refrain from judging the amount of its value.

I recently shared this story with a friend of mine, as I’ve shared this story with many others throughout the years. I practice it myself and have indeed received a bounty! Now, does my prosperity and abundance hinge upon the found penny added to my wallet or from the seed for prosperity planted within my mind that allows my abundance to grow? I cannot be sure, but to figure that out might ruin the fun.

Nevertheless, my friend decided to test this theory when he noticed a penny on the ground. He picked it up and gave thanks to the penny gods. A day later we were walking through a store together and he told me how he found a penny the day before and decided to try the seed money story. He said that after finding one he was upping the ante and requesting to find multiple pennies. No sooner than he said that, as we were walking out of the store, there were two pennies lying there on the ground that only he saw and bent down to pick up. He said out loud a thank you to the penny gods, but this time he upped the ante another notch and requested to find larger increments of money.

My friend joined me for a power walk a few days later. Not only had he found a nickel one day, but the following day he found a dime. The increments were indeed increasing! As we were walking we discussed how he seemed to be on a roll with this seed money theory. He said that he might as well go for it and request even greater increments of prosperity to flow to him in any way it may present itself. The timing of this conversation was uncanny and synchronistic for we were crossing a street just moments later, he bends down to pick up two quarters, as if the penny gods had placed them there themselves. We both laughed in excitement.

He placed one of the quarters into his pocket and handed the other to me and said, “I’m sharing the abundance with you.” I accepted my friend’s gift of seed money. This was another concept that the prosperity teacher shared with that class way back in 1998 on seed money. She told us to always express gratitude and to share one’s abundance with others. It’s through the act of sharing that more prosperity will flow.

About a week later I received a call from my friend explaining that whatever is happening with this seed money concept, the flow continued to touch him in grander ways. He reported that his company had just reached an all time sales peak in the history of his business.

Whether it’s the penny that brings the luck or it’s the believer that attracts the luck, doesn’t really matter. What does matter are the beliefs and feelings enlivened within oneself that creates an energetic-like attraction, magnetically allowing the flow of prosperity into one’s life. Now, this may just seem too far-fetched to believe and you may feel just too darn silly to pick up those pennies, but if you don’t someone else will!

I will say this, it’s almost eighteen years later from that course on seed money and I’m still picking up pennies, excitedly anticipating the flow of abundance found in that one little cent.

May Your Spirit be Inspired!